by Rock Against Hate benefiting KIND 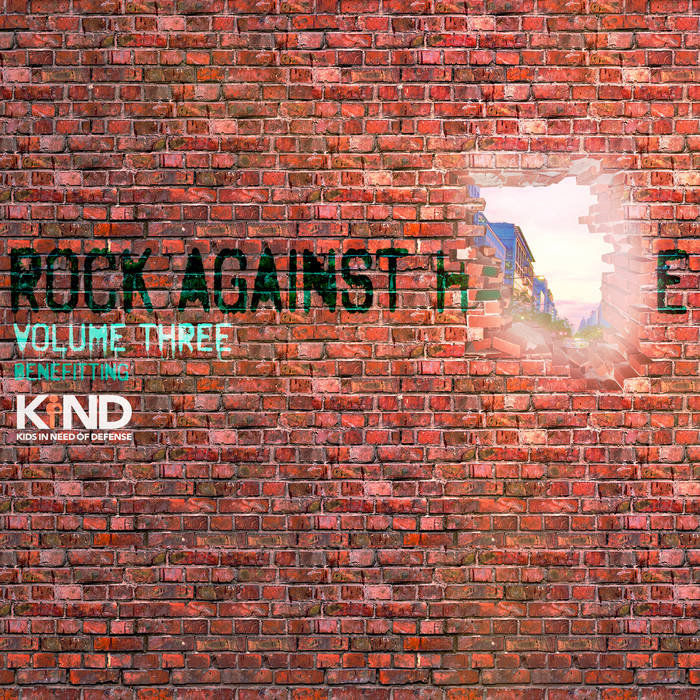 Click on individual songs for more information about each artist

RockAgainstHate.org., musicians making a difference by raising funds for good causes through the online release of music compilations featuring songs from New Jersey artists and around the globe, will release its third compilation – Volume 3 - on May 11 to benefit Kids in Need of Defense (KIND).

The compilation will be available via Bandcamp for a donation of $10 or more. All proceeds for Volume 3 go to KIND.

RockAgainstHate.org was established in 2017 in the wake of what was considered a divisive election with musicians coming together to release original exclusive songs to raise funds towards anti-hate efforts and equal rights. To date, thousands have been raised for organizations such as The Trevor Project and Planned Parenthood from the first two volumes.

"With the actions we have seen our current government take towards immigration, it seemed more pressing than ever to have Volume 3 benefit KIND, an organization that helps the most vulnerable of immigrants, children,” says Lazlo (founder of BlowUpRadio.com and curator of 'Rock Against Hate' Compilation). "I am proud that I am able to work with the music community to try to contribute towards helping others.”

Founded by Angelina Jolie and Microsoft, KIND helps protect the basic human rights of refugee and immigrant children in the United States, many of whom come to escape violence and persecution.

RockAgainstHate Volume 3 features original songs exclusive to this collection. The songs reflect a wide range of styles and subject matters that will appeal to many musical tastes.

See full track listing below. Special thanks to Dw. Dunphy for designing the artwork for Volume 3.

In addition to the digital album being available for download on Saturday, May 11, there will be a benefit release show at Espresso Joe’s in Keyport. The show will run from 2pm until closing and feature acoustic performances from: Amanda Rose Riley, Carol Lester, Creeping Hush, Diego Allessandro, E.Joseph, Hal Guitarist, Keith Peters, Laree Cisco, Mike Ferraro, The Last Martyr and The Mighty Alrighty.

About KIND
Kids in Need of Defense (KIND) was founded by the Microsoft Corporation and UNHCR Special Envoy Angelina Jolie, and is the leading national organization that works to ensure that no refugee or immigrant child faces immigration court alone. We do this in partnership with over 600 law firms, corporate legal departments, law schools, and bar associations, which provide pro bono representation to unaccompanied children referred to KIND for assistance in their deportation proceedings. KIND has received more than 18,000 child referrals since we opened our doors in 2009, and trained over 40,000 pro bono attorneys. KIND also helps children who are returning to their home countries to do so safely and to reintegrate into their communities, and supports sexual and gender-based violence prevention programming in Central America.
www.supportkind.org

About RockAgainstHate.org
Lazlo (curator of Rock Against Hate) created BlowUpRadio.com in 2000 as an internet radio station & website to promote New Jersey’s local original music scene. In more than 18 years, BlowUpRadio.com has raised money for many non-profit associations, most notably the Spondylitis Association Of America, with which they do an annual series of benefits dubbed, Banding Together. In 2017 he established RockAgainstHate.org to bring musicians together to raise funds for charities that work towards anti-hate efforts and equal rights.

All money made from Rock Against Hate Vol. 3 goes directly to Kids In Need Of Defense (KIND) .

Founded by Angelina Jolie and Microsoft, KIND helps protect the basic human rights of refugee and immigrant children in the United States, many of whom come to escape violence and persecution. ... more

Bandcamp Daily  your guide to the world of Bandcamp